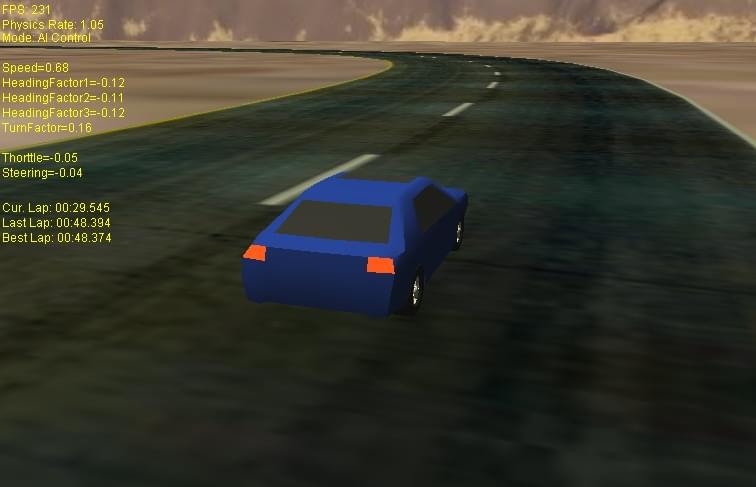 The purpose of this project is to train an Artificial Neural Network to control a vehicle around a racing track.

The track is defined by a few basic waypoints which are interpolated using splines to create a smooth track.
The user drives the car around the track and the collected information is used to train the neural network.
After the neural network is trained we let it control the vehicle.

The projects is written in C++ (MSVC6) and uses DirectX 8 for the graphics.
[ODE (Open Dynamics Engine)](http://ode.org/) is used for the car physics.

The track is rendered as a single textured triangle strip and the car model is rendered as a D3DXMesh.
There's also a simple sky box and several camera angles to make things more interesting.

The main idea for this project is to develop a generic, neural-network based, game AI for vehicle command and control (cars, tanks, aircraft, mechs, etc.)

The 2 main classes of the project are Driver and Vehicle:
The Driver class encapsulates the artificial neural-network (or networks) that make up the "Brain" That controls the Vehicle.

The Vehicle class is an abstract base class from which all vehicles are inherited (e.g. Car)
Each Vehicle class can be controlled by several drivers (objects of the Driver class).
Each Driver is assigned a place (station) in the Vehicle
With this architecture it is possible to simulate a vehicle with several sets of controls.

For example, if we would like to simulate a tank - first, we inherit a Tank class from the Vehicle class.
Then we create 3 different Driver objects and assign each one to a different Tank station (see diagram).
We can then train each Driver to control the specific systems of its station according to inputs received From the Tank object.

For the Driver to control the Vehicle, the Driver needs to perform the following actions:

If we take the NeuroDriver demo as an example, we use the car's speed, heading factors and turn factor as the inputs for the neural-network, and the outputs of the network are used to set the steering and throttle of the car (see drawing) :

With the NeuroDriver architecture it is also possible to use more then a single network as the Driver's "brain"
Each Driver class contains a Brain class and each Brain class can contain one or more BrainLobes.
Each BrainLobe class encapsulates a single neural-network.
This gives us the ability to use more then a single-network for controlling the Vehicle.
For example, we can use one neural-network to control the steering and another neural-network to control the throttle.

The physics engine in NeuroDriver consists of 2 main classes: PhysicsServer and PhysicsClient.
The PhysicsServer class is responsible for the world physics (e.g. gravity).
It is a singleton, only one instance of this class can exist in the application.

The PhysicsClient class is an abstract class, so we need to inherit a new class from it and implement our physics inside this new class.
For example, the car physics in the NeuroDriver demo inherit a CarPhysics class from PhysicsClient.
The CarPhysics class implements the actual car physics, it updates the car state according to the forces Applied on the car in each simulation frame.
The demo uses the ODE (Open Dynamics Engine) physics library to simulate the car physics.

Following is a diagram of the core simulation classes: